At the age of 10 Sheila said she decided to become and author. Educated at home (9, Dane Road, St Leonards) by French governesses she then went to Hastings and St. Leonards Ladies College, where she studied 17th century poets.

When her father visited his patients she went with him to the countryside around Hastings. As children, she and her sister stayed at farms at Wadhurst and Westfield. She developed a great love of the local countryside from the Romney Marsh in the east to the Ashdown Forest in the west.

Published in 1937 ‘Three Ways Home’, Sheila writes of three strands in a ‘shining cord’. These were the countryside of the Kent and Sussex borders, her writing and her religion. Later she added a fourth, her marriage to Penrose Fry.

Theodore Penrose Fry was born at Great Ayton in Yorkshire in 1892, the eldest son of Sir John Pease Fry. He was educated at Winchester and King’s College, Cambridge. The Frys were an old Quaker family. However, Penrose served during WW1 as a captain in the 5th Durham Light Infantry.

In her book ‘All the Books of My Life’ Sheila wrote she embarked on a conscientious reading programme – Thomas a Kempis, The Imitation of Christ and The Confessions of St. Augustine. She attempted to teach herself Greek in order to read Euripides in the original.

Sheila wrote throughout her childhood and her first success was a short story ‘Kate All Alone’. Her first successful noel was ‘The Tramping Methodist’ published in 1907 and selling 850 copies.

She stayed in London for a while and met other authors – among them were Alice Meynell, Marguerite Curtis, Robert Nichols, Trevor Blakemore, Compton MacKenzie, Hugh Walpole, May Sinclair, W.L. George and G B Stern.

She also worked at the War Office during 1917.

Returning from London she realised that the main interest in her life was not literary but religion. She began going regularly to Christ Church, St. Leonards. In 1918 she made her first confession in the Church of England.

In 1920 Sheila was invited to meet Thomas Hardy in Dorchester.

In 1921 Penrose Fry was ordained in the Anglian Church and was appointed assistant priest at Christ Church, St. Leonards in 1921.

In August 1921 Sheila’s most successful novel, ‘Joanna Godden’ was published and sold 10,000 copies. This novel enhanced her literary reputation. It was later filmed as ‘The Loves of Joanna Godden’ starring Googie Withers and Michael Dennison.

After the success of ‘The End of the House of Alard’ she joined the Anglo-Catholic Movement.

In July 1924 she was engaged to the Rev. Penrose Fry and on 16th October of that year they were married in St. Paul’s Church, St. Leonards.

Penrose had to resign his position at Christ Church as there was a tradition of celibacy of clergy there. He became assistant priest at St. James’, Norlands, Notting Dale, and they lived in a flat at Holland Park.

After two years he decided to move to St. Stephen’s, Gloucester Road. Sheila pursued her literary career but was very homesick for the countryside she knew.

Sheila and Penrose became increasingly unhappy with the Anglo-Catholic movement. In September 1928 they visited Sicily and were impressed with the Roman Catholicism as practised in the Cathedral at Palermo. The following year the vicar of St. Stephen’s resigned and Penrose had to think of another job. They soon joined the Roman Catholic Church and received six months instruction from Fr. Charles Martindale S.J. a noted Oxford scholar, at Rye. In the spring of 1929 they decided to settle in Sussex at Little Doucegrove.

This house originally formed part of the Brickwall Estate owned by the Frewen family of Northiam. Realising that they were 9 miles from the nearest Catholic Church, St. Anthony of Padua, Rye, Sheila and Penrose visited Dr Amigo, Bishop of Southward. He gave permission for a chapel to be opened and to have mass there whenever they could secure a priest. The building and renovation took 9 months.

At the beginning of 1930 they were in Rome and had a special audience with Pope Pius X1 who blessed their intention regarding the chapel, and in Lisieux at the shrine of St. Teresa they placed the intended chapel under her patronage. They also bought additional land, including the field on which the church now stands.

The chapel was in a hayloft over the garage, and on December 5th 1930 a Votive Mass of St. Teresa was first said there by Fr. Dudley. 7 people were present. On 7th December Mass was heard by 28 people and in the afternoon 14 people attended Benediction.

Early in 1931 a limited edition of The History of Susan Spray, The Female Preacher was published by Cassell & Co. It was brought out again by Virago in 1983. Sheila was accused of Jesuitical propaganda.

Regular Sunday Masses began in 1932 and soon the chapel proved inadequate for the size of congregation. At Easter 40 people attended Mass. After consultation with the diocese it was decided to build a permanent church with Sheila and Penrose bearing most of the cost. Work began in August. On 1st November 1935 an article appeared in The Universe entitled ‘Famous Novelist Builds a Church’. On 8th December 1935 – the Feast of the Immaculate Conception, St. Teresa’s at Horns Cross, Northiam was consecrated, with a congregation of more than 110. About a year later it was first licensed for marriages, and in October 1937 the churchyard was consecrated for burials. A complete account of this time can be found in ‘The First Five Years’ and ‘The Making of a Layman’ by Penrose Fry, and also in ‘Three Ways Home’ by Sheila Kaye-Smith.

Description of the wartime years may be found in Sheila’s book ‘Kitchen Fugue’ published in 1945. In May 1944 Sheila made her will desiring to be buried according to the rites of the Roman Catholic Church in the churchyard of St. Teresa’s, clothed in the habit of a Lay Dominican. She left endowments to St. Teresa’s.

1946 saw the filming of Joanna Godden starring Googie Withers, John McCallum and Jean Kent. The screenplay was by H.E. Bates and the music by Ralph Vaughan Williams, and it was filmed on Romney Marsh.

In 1952 ‘Quartet in Heaven’ was published by Cassell & Co. This comprised 4 biographies including one of Cornelia Connolly.
In 1954 Sheila began work on a book on books ‘All the Books of My Life.
In 1956 on 14th January Sheila died from a cerebral haemorrhage and was buried in the churchyard of St. Teresa’s.

On the 50th anniversary of her death, Canon Charles Walker, priest in charge at St. Teresa’s, said Mass for the repose of her soul at the convent chapel, Filsham Lodge, Hastings, at the request of the Sheila Kaye-Smith Society.

Penrose eventually sold Little Doucegrove to the novelist Rumer Godden, and after a fire the house was completely rebuilt.

In 1963 Penrose’s health began to fail, and he died in 1971 in a nursing home at Barton-on-Sea, Christchurch, Hampshire. He was buried beside his wife at St. Teresa’s.

In 1986 St. Teresa’s was re-furbished and, in October formally dedicated to the saint by the Bishop of Arundel and Brighton.

In 1987 Mr. Brian Graebe proposed the formation of a Sheila Kaye-Smith Society in her centenary year and the first meeting was held on the 3rd July 1987. A considerable collection of letters and papers were transferred into the ownership and care of the West Sussex Record Office where they are held under ideal conditions. Penrose sold various papers and manuscripts to the Harry Ransom Humanities Research Center of the University of Texas at Austin, and in 1999 they advised the Society they had acquired the manuscript of ‘Joanna Godden’.

In September 1998 responsibility for St. Teresa’s was transferred from the Diocese of Southwark (Tenterden) to the Diocese of Arundel and Brighton, within the parish of Our Lady Immaculate & St. Michael, Battle.

These notes are abstracted from those made by Josephine Hopkinson from The Chronology of the Life and Works of Sheila Kaye-Smith, compiled by Michael Bristow-Smith for the Sheila Kaye-Smith Society.

All meetings are held at 2:30 pm on Saturday at Filsham Hall, Filsham Road, St Leonards-on-Sea unless otherwise shown. 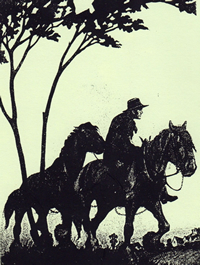 This was the standard jacket design for the Uniform Edition of Sheila’s novels issued during the 1920s. The figures varied with the title (in this case ‘The Challenge to Sirius’) but the over-arching tree was always the same.